Some of you may have noticed that I have a fascination with abandon buildings and houses.  Now I am adding industrial sites to the mix as well.  The shots in this post were taken at the Nemacolin mine in Nemacolin, Pa.  Nemacolin mine was in operation from 1917 through 1985-6 when it was closed for good.  In 1919 Nemacolin mine was considered to be the largest coal mine in the country.  The town, built by the coal company, had a theater, tennis courts, amusement hall, and a swimming pool. They also had their own hospital and elementary school, both of which have gone by the way side.  It was said that the town was considered to be the model mining town in the country and the mine was considered to be the model mine for the entire world to look towards.  To give you an idea of how advanced the town was, in 1917 the town had its own sewage treatment plant.

On a personal note, two of my family members worked in this mine.  My grandfather worked in this mine his entire coal mining career.  I was not aware of this until after visiting the mine and taking the photographs.  I was talking with my mother and had mentioned that I was at that mine taking photos. She got really excited and told me the story of how she would go with my grandfather on Saturday mornings to pick up his pay check.  They lived across the river, in Messmore, and would drive to the Nemacolin ferry and cross over to the mine to pick up his check.  She also told me of the stories that my grandfather would tell about walking out of the shaft when there would be a problem in the mine.  Apparently if there was a problem or the electricity would go out the miners would have to walk a set of steps from the bottom of the mine up the entrance shaft.  The other member of my family that worked there was my father.  He worked there a short period of time until transferring to the Buckeye mine in Carmichaels Pa.  She also told me that the miners were able to travel underground between the two mines, which are approximately 2-3 miles apart.

For the photographers reading this the are all HDR photos processed using HDR Efex Pro.

I hope that everyone enjoys the photos and the short history lesson about this mine.  Feel free to leave comments and ask questions.

As some of you may have seen I have been working on a series of photographs which I have been referring to as “Desolation”.  The series is based on abandoned buildings and houses throughout the region.  I started this series last year with the intentions of just getting a few interesting shots from an old house that I had come across.  I can certainly say that I instantly was fascinated with the idea of the these forgotten places.  Since then I have been photographing and visiting as many places that time allows and the series has been growing.  Starting tomorrow night I will have an exhibit of some of this series at the Allegory Gallery in Ligonier, Pa.  The opening will be Friday, February 10, 2012 from 5pm to 8pm.  The show will run through March 8, 2012.  If you are in the area please stop by and take a look at the show and let me know what you think.

The photographs that will be on display consist of Black & White and Color HDR (High Dynamic Range) images.  I decided to take this series in a “digital altered” direction to add some dramatic effect to the photographs.  Also, to better show some of the amazing textures and detail that can be found in these capsules of time.  It is always interesting to look inside these places and wonder why did the owners leave, where did they go, and why did they leave so many of their belongings behind?  I have seen everything from pianos to a business check book that contained a un-deposited check.  Some of the places look as though the people just gathered up some of their belongings and walked out the door.  And then I come along all these years later and take the photos of the emptiness and desolation of these places.  And even though the places are abandoned and without people, to me, they have somehow managed to take on a personality or life of their own.  And this series captures some of the “life” that I have come to call “Desolation”.

I hope that you have a chance to stop by Allegory Gallery and take a look at the show.

I have been working on this project for a while now and some of it will soon be on display during February at the Allegory Gallery, in Ligonier, Pa.  www.allegorygallery.com

This project began with an old abandon house that I photographed, which sparked an interest in finding more abandon places.  I have decided to use the HDR technique for this project which has resulted in some very interesting results.  As I work on this project it often comes to mind why did the people leave?  Where did they go?  And why did they leave so much of their belongings behind?  Questions, I fear, that may never be completely answered.

I hope that you find the photography of this project as enjoyable as it was for me to produce the photos.  I will update with the particulars of the show as soon as they become available.

Hope to see you at the show…

Until then here is a quick teaser…

Headed out to find some more buildings for my “Desolation” project.  I think I will head over to Green County and see if I can find some of those old abandon coal mine building.  I will post some photos of what I find later.

There is a photography exhibit at the Allegory Gallery in Ligonier, Pa.  The photographer is Lorie Lee Womack.

Her exhibit is titled “Human Nature” which is a series of photographs that incorporate people and nature.

If you are in the Ligonier area and have a chance to stop in Allegory Gallery take a look at Human Nature. 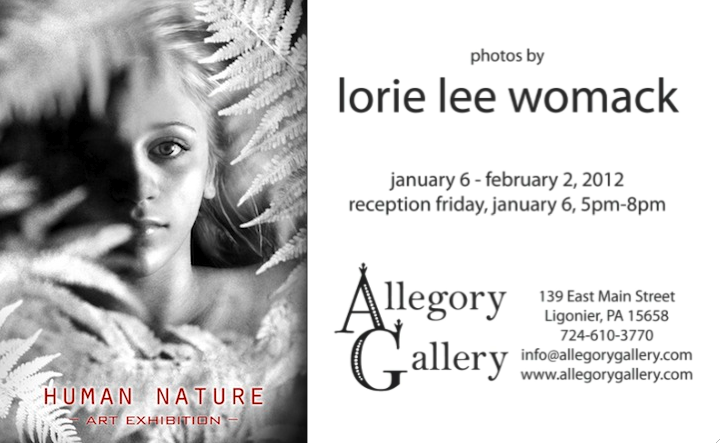 So i’ve been working on a new series of photos.  A while ago a good friend of mine suggested that I work in series, and I have done a few small ones and find it very interesting to keep them in mind as you are looking for something to photograph.  I did a series on reflections where I used chrome on automobile and reflections in glass windows on buildings.  The series worked well for me as I used it to become a member of Pittsburgh Society of Artists as well as the Associated Artists of Pittsburgh.

The new series that I’m working on is: “Desolation”

The dictionary defines desolation as a state of complete emptiness or destruction.  The following photos are the beginning of this new project and as I work on it I will post more of the series.

Hope you enjoy.  Feel free to comment back and let me know what you think.